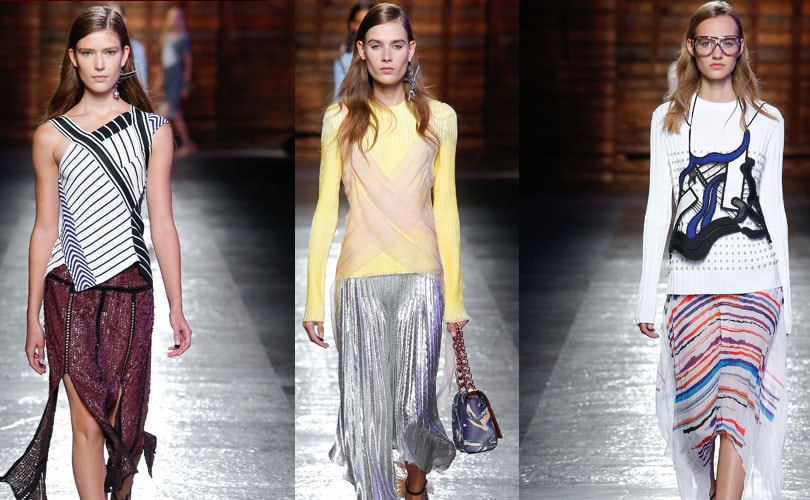 Is it global warming or the fledgling economic recovery that is driving the trend? Milan's creatives seem convinced next summer's going to be one for stripping down to the lightest, skimpiest and brightest of outfits ... and having some fun.

The cheerful, optimistic tone set by Gucci's 'geek chic' vision of femininity on Wednesday, continued into the second day of the Milan fashion week, which saw Massimo Giorgetti take his eagerly-awaited bow at Emilio Pucci. Giorgetti has taken the reins following the departure of Norwegian Peter Dundas, who jumped ship to Roberto Cavalli following its founder's decision to sell a controlling interest to a private investment group. When he got the job earlier this year, Giorgetti signalled his intentions in a press release featuring two models wearing plain white T-shirts with the message: "Like blank paper. A new story to tell." The new story is a younger and lighter one: this was a collection packed full of transparent materials alongside metallic pleated skirts and feather-decorated sandals.

As in MaxMara and Blugirl's collections earlier in the day there was also a strong aquatic theme with numerous fish, shell and starfish motifs running through the trademark bold prints and the models sporting sunglasses that resembled scuba masks.

One to buck the trend was Karl Lagerfeld, whose latest collection for Rome's Fendi was heavy in leather (not just in the latest incarnations of the brand's famously expensive handbags).

Snakeskin trench coats and olive bomber jackets were among Lagerfeld's standout pieces. The initial critical reaction was far from universally favourable but there was no disputing the quality of the craftsmanship on display -- perhaps most tellingly illustrated by the creation of a one-piece swimming costume in the most supple black leather imaginable.

If Costume National designer Ennio Capasa has his way, next summer will be a largely black and white affair -- and sleeves will be banned. His collection offered a twist on male tailoring with masculine jackets shorn to expose shoulders and create a kind of sexy gilet. Sombre suit fabrics were illuminated by silver stitching. 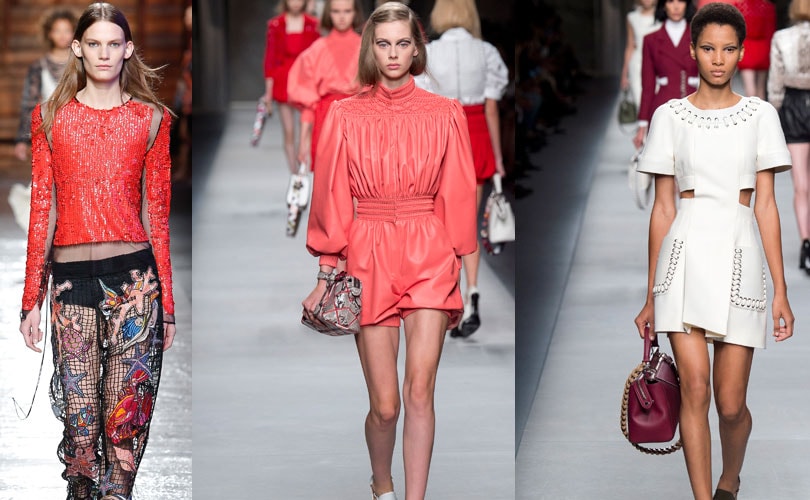 Blu girl's legions of young supporters meanwhile were pointed in the direction of the beach in microshorts given a half-buttock bikini cut. They were paired with woven sandals in a collection entitled "Joie de Vivre" that looked forward to more confident, optimistic times than the fashion industry has operated in of late. To the strains of Jacques Brel's "Amsterdam" and "What Shall We Do with the Drunken Sailor," MaxMara sent out their models in an array of outfits rich in bold hoops, maritime-inspired colours and symbols, knotted cord ties and chunky drawstrings on light fabrics. Illustrator Brian Grimwood created the show's ocean liner backdrop and his work also features on T-shirts, duffel bags, luggage labels and the brand's signature JBag.

Doubled-faced peacoats, rows of polished buttons and star-patterned semi-chunky sweaters and tank tops continued the nautical theme. It was, the creative team said, an attempt to fuse naval discipline and marine romance into a vision of a new, athletic femininity. Or, as they also put it in a classic piece of fashion-speak: "Naive is the new sophisticated." Blugirl emphasised a more sensual form of femininity with designer Anna Molinari anticipating a new jazz age and taking her cue from "an idea of intangible hedonism."

Black dancing feathers adorned jazzy evening dresses, there are many touches of white macrame lace, crepe and taffeta, and poplin or denim shirt dresses were designed to open up easily over swimming costumes or those revealing shorts.

If it wasn't very, very short, it was very long. "Lengths have no half measures: they reach the ankle or entirely bare the legs," Molinari says in her notes on the collection, explaining the preponderance of long skirts she described as "an incontrovertible statement of a new sensuality." (AFP)